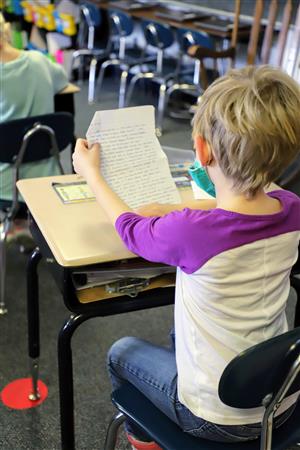 Last fall Ms. Aaberg came up with an idea to help her students appreciate soldiers.  " I have some experience with military life and know that soldiers away from home love to get packages and gifts and especially love to hear that people support them. My ex-husband is a part of the unit that is currently deployed and that is how I came into contact with the leader of the unit- Captain Beyl."  Ms. Aaberg explained.

Students colored pictures that said "thank you" with a flag and attached letters each wrote.  Most students asked them what their name was, what the weather was like, their favorite color, or asked about their families.  First grade classes have a switch rotation, so she was able to do it with all the first graders that week and then mailed the letters and pictures to Captain Beyl at the end of the week. The students had a lot of questions and didn't really understand what deployment was, but they were excited to write the letters and see if they would get a response.

"Most students this age do not like writing, but liked being able to have a purpose for this writing and possibly getting something out of it, much like a pen pal."  Making it around the world and back is not a quick process but the awaited responses made their way back a couple of weeks ago. 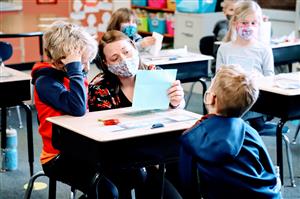 "Some of the soldiers sent pictures of themselves or of things they like and answered their questions- their favorite color, about their families, explained that it doesn't snow where they are, but rains all the time, things they like to do, some of the soldiers talked about military time and some of wrote about things they have been doing over there like guard duty or games. Some of them wrote that they hung up the letters and art on their walls to remind them that people are thinking of them and that they would cherish them."

Captain Beyl thanked Ms. Aaberg and said he remembers doing something similar in school during the Gulf War.