See you at the show!

In the modern classic Into the Woods, Broadway legends Stephen Sondheim and James Lapine bring the Brothers Grimm fairy tales to life. A large ensemble of characters intertwine on their quests toward wish-fulfillment, including Little Red Riding Hood (played by Lauren Densmore), the Witch (played by Jessica Workman), Cinderella (played by Bailey Gatz), Rapunzel (played by Betsy Gallagher), and Jack (played by Elijah Densmore). Uniting the plotlines are a poor Baker (played by Jubal Nelson) and his Wife (played by Ellen Aho), as well as the Narrator (played by George Smith). 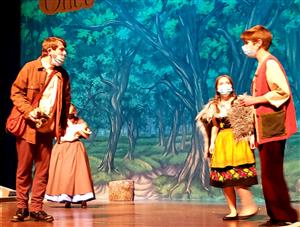 Sondheim and Lapine expand on their source material by exploring the consequences of the traditional “Happily Ever After” endings, revealing how things turn out for the classic characters after their wishes are fulfilled. As a result, a mix of tragedy, romance, and comedy plays out upon the stage. Much of the comedy is provided by two royal princes (played by Isaac Sombke and Nicholas Little) and Jack’s long-suffering mother (played by Annika Soderlund). Amidst the convergence of characters and tones are powerful themes of family, fate, and forgiveness. 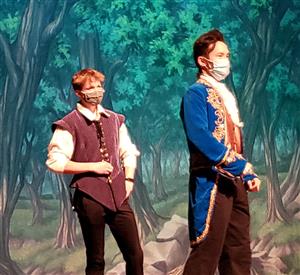 ction is helmed by director James Frickstad and assistant director Isaac Olson. The vocal director is Nancy Jo Aldrich and the production assistant is Rachel Olson.

CLICK HERE to view some of the performer's profiles!